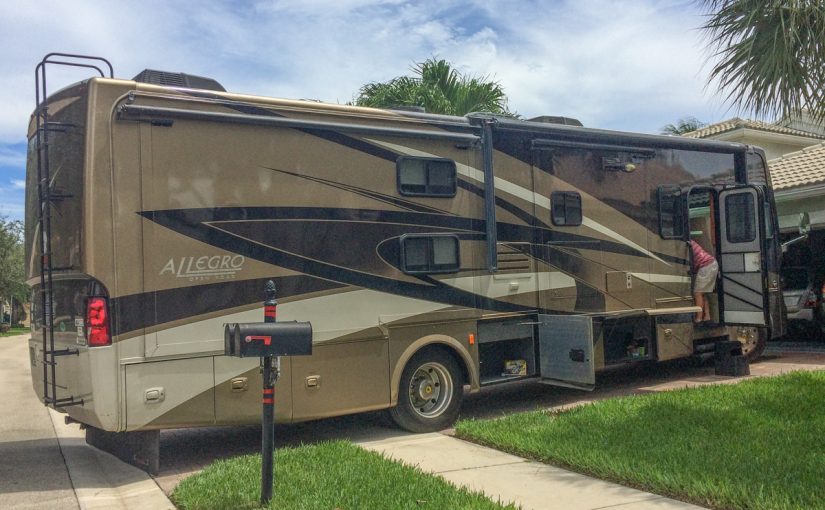 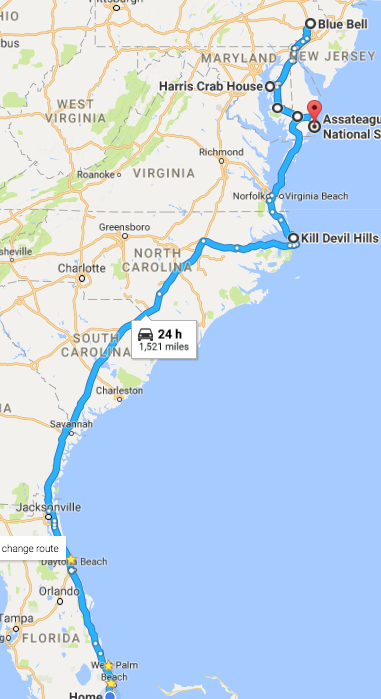 We took about a week to cover the nearly 1500 miles up the Eastern Shore, partially via I-95 but largely on secondary roads. Occasionally, we traveled on roads so small that we had to back up one or more times to make the turns. 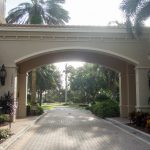 We picked up the RV the morning of the departure, drove back to our home in Valencia and navigated the entrance arch with several inches to spare.

Our first stop was at Rose Bay Campground, a location chosen primarily because it was close to home. We loaded the RV, drove to Rose Bay, and learned how to set up the RV for the night.

There were many high points and no real difficulties. We especially liked the stop in Savannah where we were so surprised by the beauty when we took a motor tour on a narrated “trolley” that permitted unlimited off-and-on stops to take photographs. 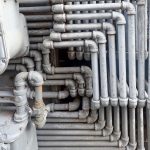 Savannah is known for its pipes. Bet you didn’t know that; I just made it up.  In case you were curious how dozens of apartments each got their correct gas bill, here is how it is done  If you weren’t curious, it still makes a nice photograph. 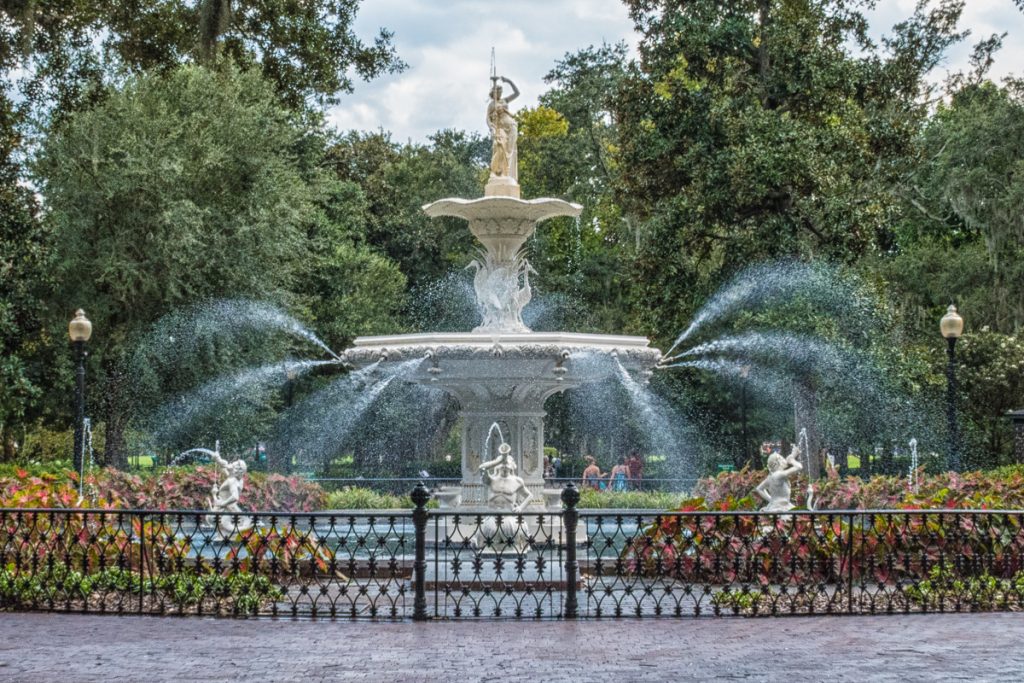 Churches and fountains serve many purposes. One of the thing they do that I love best is the creation of lovely art. Statues, stained glass windows, fountains and beautiful buildings grace Savannah, courtesy of the many churches in the main portion of the city.

We stopped in a lovely wooded campground in Fayetteville, NC for a “home cooked” dinner and our first campfire of the trip.

We also stopped at OBX campground at  Kill Devil Hills, near where the Wright Brothers flew the first airplane. Comfortable (that means flat in RV language) campground with air conditioning, water, and sewage. We were able to walk to the SaltBox for a lovely dinner.

After OBX (outer banks) Campground, we continue to the Assateague National Seashore to visit the Chincoteague Pony herd. 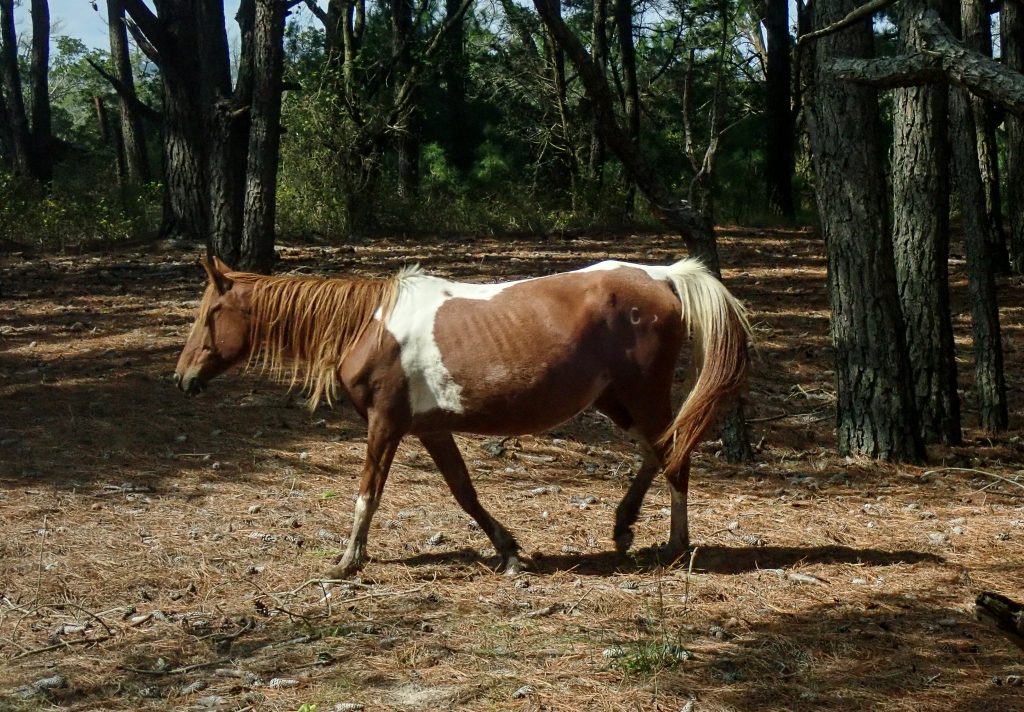 The best part of the trip North was the stop at Assateague National Seashore to see the wild ponies. We were fortunate to catch the “Refuge Trek” bus that was permitted deep into the seashore land where the ponies and mosquitoes ran free. The air-conditioned bus preserved our lives and the one stop was timed to see the best of the ponies while avoiding most of the biting wildlife.

Also located on the Assateague National Seashore was the Assateague Lighthouse, a beautiful structure that was adopted by local conservation groups who preserved it for us to ejoy.

We did some campground juggling during this period when we discovered that the Assateague National Seashore was on Chincoteague and the campground we reserved on Assateague was an hour away.  Thus, we had two campground changes and ended up in a very nice KOA after visiting the ponies and the lighthouse. RV campgrounds, even nice ones, are unremarkable, the best part usually being the sewage dump pipe.  In this case, the best part was a visit to the Crusty Crab for dinner. Nice place, kind of far away, with good, fairly priced dishes including wonderful Shrimp and Grits.,

Traveling North, we passed through one of the United States’ engineering marvels, the Chesapeake Bay Bridge Tunnel. This waterway crosses the bay just as it joins the ocean at a very wide point. We wrote for permission to go through the tunnel, due to our 13′ 6″ height being close to the tunnel maximum, and the cooking propane carried on board the RV being prohibited at certain times. Permission in hand, we ventured across the bay, enjoyed the view of a departing aircraft carrier, and appreciated the opportunity to view the bay closeup.

The CBBT was constructed as a two-lane ribbon of causeways, bridges, and tunnels opened to traffic in 1964. As usage grew, the above-water portion of bridges and causeways was extended to two ribbons, each two lanes. This improved traffic flow but left the three tunnels as a bottleneck with only a single lane in each direction. Construction of three new tunnels, parallel to the existing tunnels, is underway and expected to open in about five years.

We drove through the 2-way tunnels facing the oncoming traffic with just a few inches to spare – hoping our next visit to CBBT is after the second set of tunnels is complete. 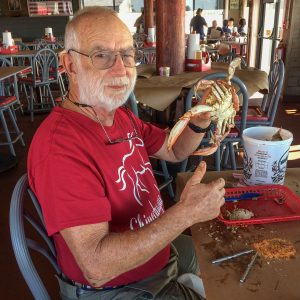 I enjoyed three of the largest and most meaty crabs I can remember eating, while Joan shared with me (my first ever taste) her Harris’ Jumbo Lump Crab Imperial with remoulade sauce, a dish composed nearly all of fresh-picked crab meat. Both were excellent.

We noticed a E-2C Hawkeye surveillance aircraft with a large radar dome on top practicing takeoffs and landings at a nearby airfield. It must take real skill to fly an aircraft with a radar bigger than the plane seemingly glued to the top. 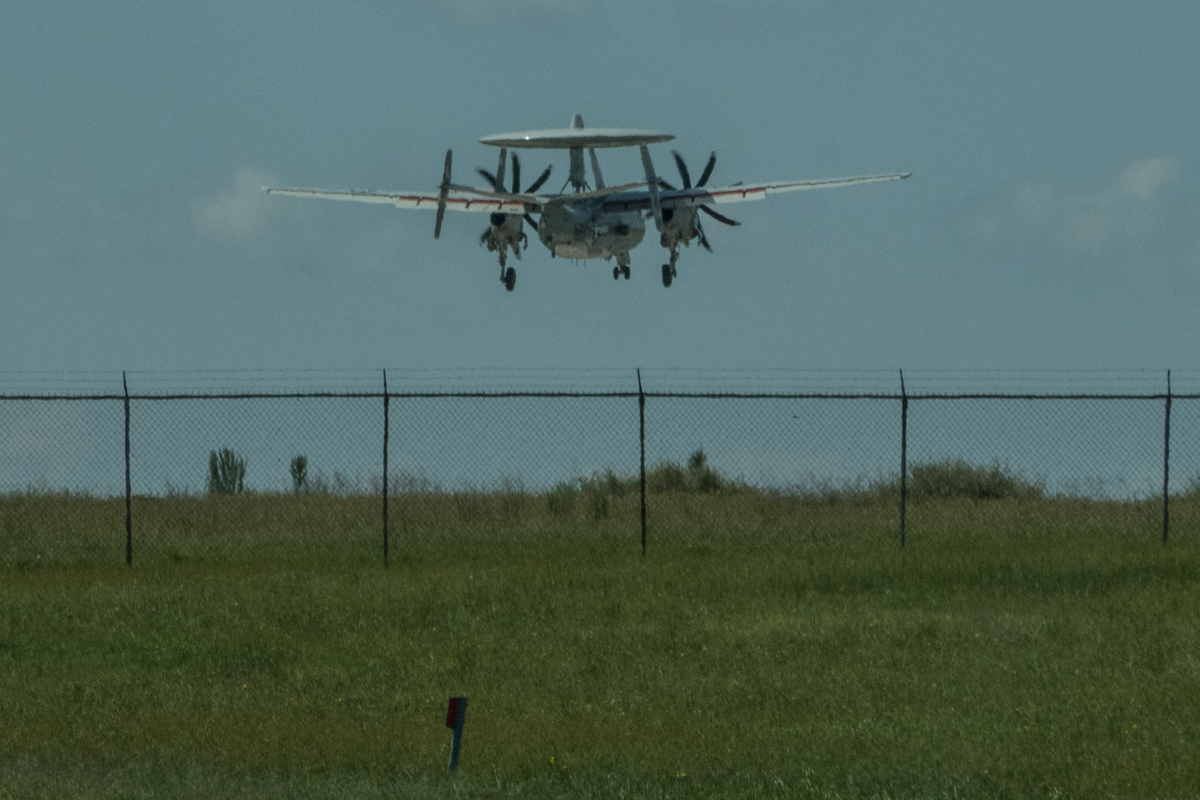 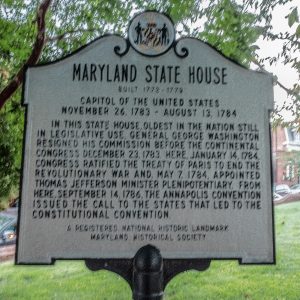 Annapolis is the State Capital of Maryland and, years ago, the United States. Annapolis is know for its beautiful homes, narrow streets, and crowded parking. We forgot all these lessons when we maneuvered our RV onto the City Docks and actually found four parking spots in a row we could occupy.

A “famous” landmark in downtown Annapolis is Storm Bros. Ice Cream Factory. Working out of a narrow

building in the middle of the waterfront, they dish out ice cream to an endless stream of people who come as much for the atmosphere as the ice cream. After maneuvering the RV into 4 parking spots and paying the meter for one of them, we walked across the street and enjoyed!! Great ice cream. Now for the drive back to the highway. Google Maps routed me the way I expected and off we went.

The first few blocks were straight, with 6″ or so of clearance on each side. Then we came to a right turn with a car illegally parked at the top of the “T”. We could not go forward, and we could not go back, with a line of cars behind us waiting for us to move on. Eventually the illegal car moved and 20 minutes later we had negotiated the turn.  By then it was after 8 p.m. and the parking restrictions were lifted, permitting parking on both sides of a street not large enough for two horses to pass. It took us another 60 minutes and the help of two fine arm wavers to get through the next 4 cars. At one point, one of the wavers took a dollar bill from his pocket and slid it between the RV and a BMW, saying, “I don’t think you hit him.” 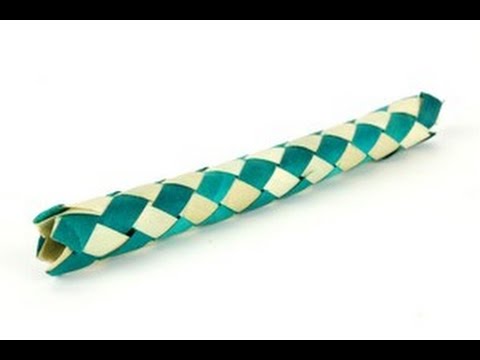 Joan was amazing, relaxed and smiling. I believe she never feared the impending riot of the drivers of the cars queued behind us on both streets waiting for us to exit what seemed like a Chinese finger puzzle at the time. The harder we tried, the worse our jam became.  Only relaxation, help and some persistence got us out with no ill effects.

After the ice cream adventure, we stayed the night at a commercial KOA camp ground and headed North and East to Blue Bell via the Baltimore Harbor Tunnel.  The tunnel is especially challenging for the RV because it carries two-way traffic and is only a few inches wider than the mirror that extends from the left side of the RV.  We closed our eyes to an oncoming tank truck until we noticed his (or her) mirror was lower than ours.

Eventually, we survived the narrow roads and ventured to the Marriott for Deanna’s Bat Mitzvah.