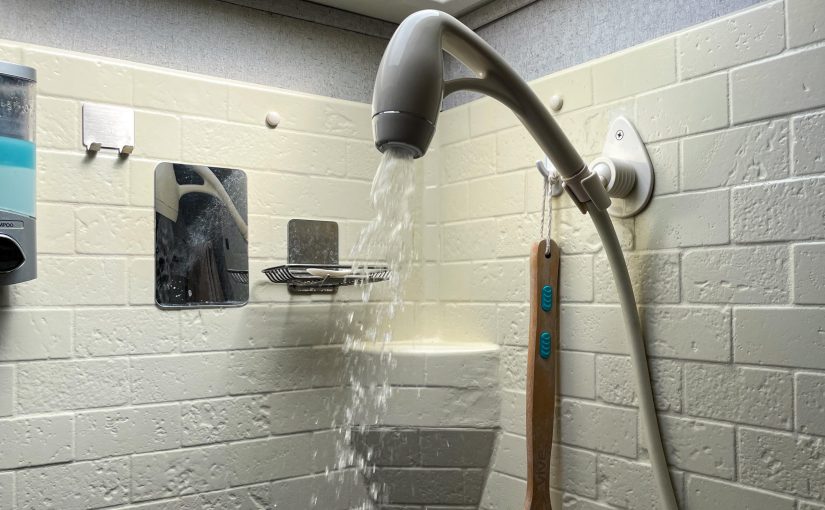 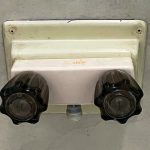 Winnie is a small traveling apartment on wheels. As with many small apartments, she was built with inexpensive fixtures to meet a budget price. In this project, we upgraded our original two faucet shower, shown on the right. The original was hard to control temperature so we replaced it with a modern temperature control fauced.

We hoped to eliminate the alternate scalding and freezing shower temperature that occurred as the pump cycled or other faucets were used in the trailer.

We purchased a MisMinn 2-Handle Thermostatic Shower Valve from Amazon. This one was selected because they claimed to use USA Standard distance between inlet pipes.  No matter, the unit was not as described so it was extra fun to install. 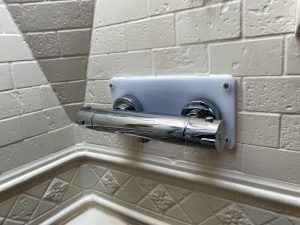 The new faucet was a bit larger than the original, requiring fabrication of a new cover plate. A few minutes of web searching yielded the nearly perfect plate, a trimmed-down Walmart cutting board. It fit perfectly, but introduced still another color into the jumble of colors that resulted from an engineer building something that an interior designer should have designed first.  Anyway, the cover plate, shown without the screw covers that are still another color, fit perfectly. 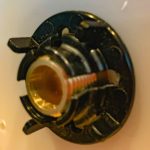 We have kind of a rule; if it looks like a grab bar, it must be strong enough to be a grab bar. This presented a challenge. The back of the new faucet has two pipes as shown on the left. The wizard who designed the faucet intended the pipe mount to hold the weight of someone who may use the faucet as a grab bar. When mounted as specified in the instructions, there is no way to screw on the water pipes. The threads are too short.  So, with some imagination and a lot of gorilla glue, I built the attachment shown.

With the factory flange, there is no way to connect the pipe. I found a very thin stainless steel washer that snugly fit the pipe and fastened it in place with gorilla glue. Perfect.

Once completed and plumbed, it looks fairly nice – excep, the colors are still kind of a jumble. I mostly shower with my eyes closed so I suppose it will be OK, but if you ever see an off-white cutting board, please send it to me!

The new temperature-controlled faucet called out for a new shower head.  I purchased an Oxygenics 26788 BodySpa RV Handheld Shower from Amazon. It performed much better than advertised and far, far better than I expected.

Both water volume and water pressure are very limited in a trailer. The usual shower is just above a drizzle, even with a boost pump installed to raise the water consumption to an unsustainable level. The Oxygenics shower head ejects a very forceful stream of water while consuming the scarce resource at a lower rate. 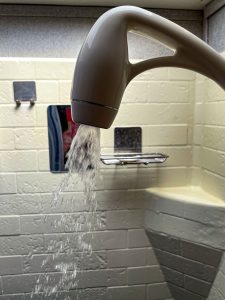 As an engineer with no interior design skills, I purchased a white shower head with a white hose. Apparently the designers at Oxygenics were better at designing a terrific shower head than matching colors.  The shower head, nose, and mounting brackets introduced three new colors into the mix.

Fortunately, Joan came to the rescue by using parts from the old head and new head to find a color combination that is acceptable.

There is a book, Pantone: The Twentieth Century in Color, available from Amazon that lists essentially every color and tells engineers what colors go together in a room. The paint chip cards at the paint store are a subset of the Pantone color set. If only every engineer knew this, they could tell buyers the color palette that would work with their shower head and shower walls. It would not make the water flow faster, but it would please anyone with a color sense who happened to use this shower.