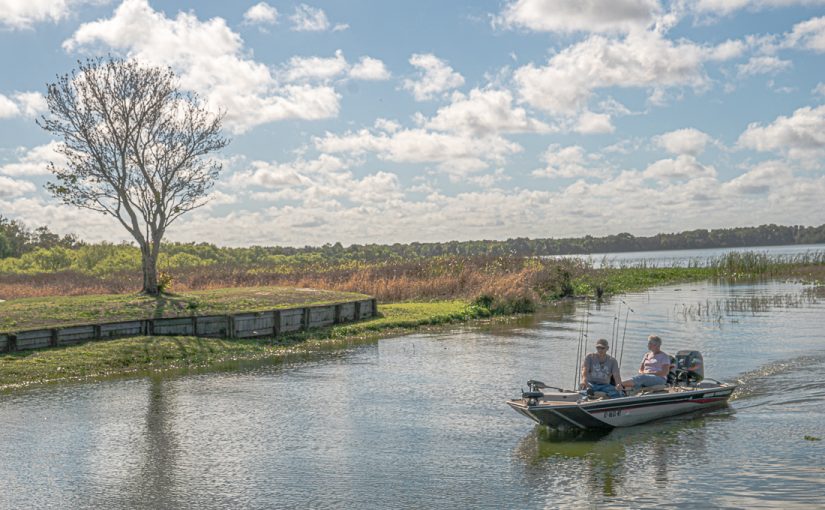 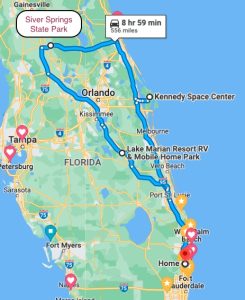 As Spring approached, we set out on a trip to visit the beautiful Silver Springs State Park. We decided to make a comfortable loop of the driving, stopping first at Lake Marian RV Resort on the unspoiled large Lake Marian just north of Lake Okeechobee. After a pleasant stay at Lake Marion, we continued to the Silver Springs area, staying across the road from the state park in a lovely campground. Finally, we went to the Kennedy Space Center area to view two launches.

Lake Marian is as close to nature as Florida gets. Since the land near the lake is unfarmed, there is essentially no excess nitrogen from fertilizer or defective septic systems. The water has the color of the adjacent cedar trees, a deep tea color, but it is clean.

We had a premium site on a point extending out into the lake with the marina on both sides. It was quiet but the few campsites on the point were crammed so closely together that our view consisted of the rest room and a truck jack up just a few feet away. Other than the closeness of other rigs and a restroom building nearby, it was a beautiful place to be, just steps from Lake Marian.

There is an alternative. In the “back” of the campground. The back campground  is a large, heavily treed area with a mixture of long-term and transient sites. Those sites are about 40% cheaper, quite large, and separated from the neighbors by a reasonable space. Ask for a shaded, treed sight “near the cows.” While there were no cows in residence while we were there, a very large field had lots of trees as the backyard neighbor.

It was a treat to talk to one of the fisherman, as he cleaned his daily catch.

One of the women we met at the Resort saw me photographing birds and told us that there was an osprey nest down the road about a mile, right past the red barn. We drove there to take a look and were rewarded with the osprey demonstrating flying skills from the nest to a nearby trunk.

We drove a few miles to Griffis Cafe, the only restaurant in town, and enjoyed a lovely dinner. Stu had Lake Okeechobee Catfish, grits and coleslaw. Joan had a wonderful, generous grilled salmon salad which was perfectly prepared by lightly grilling just the way she likes it. Griffis is inexpensive. The service was immediate and cheerful, and the police officers at the next table gave us the feeling that the locals enjoy the dinner as much as we did.

We left Lake Marian with the hope that we would soon return. We headed for Silver Springs, with a stop along the way recommended by our campsite neighbor Mike. Stu couldn’t get too much catfish, and was delighted to hear that the best catfish was served in St. Cloud, along our route north.

We arrived at our RV campground, wondering if it was really walking distance to the State Park, and were surprised and pleased to find it was right across the street.

On our first full day at the park, we took a narrated glass-bottomed boat ride around the springs and down the river, enjoying the scenery and wildlife above and below the water.

Click on the arrow above to take a ride on the glass-bottomed boat.

After the boat ride, we walked around the lovely park, and came upon the Sea Hunt deck, a structure that was built for the frequent filming of Sea Hunt episodes. Stu re-lived his Scuba Diving days in a discussion with Lloyd Bridges below.

Captain Steve guided us on an extended glass bottom tour. The tour was excellent! Captain Steve pointed out lots of fish and birds and explained the monkeys and manatees were hiding, waiting for Stu to kayak the Silver River the next day. He was correct and even more brilliant when he directed us to MoJo’s for an early dinner after the ride. Mojo’s offered Joan an excellent serving of shrimp fajitas, enough for lunch and a snack later. They outdid themselves by serving Stu a 5-star delicious portion of Shrimp and Grits, perfectly cooked, nicely flavored and tasty to the eye.

On the second day, Stu paddled his kayak 5 miles down the Silver River, an experience that was better than the advertising that promised a sighting of monkeys descended from a small troop released about 100 years ago by an eccentric sea captain. Unfortunately, about 25% of the surviving 400 now wild monkeys harbor a virus that is fatal to humans so he looked at them from a distance.

The high point of Stu’s journey was a small side trip around one of the many islands on the Silver River. Initially, Stu turned to avoid 4 power boats in the main channel. Turns out, the sleeping manatee and troop of monkeys made the same decision. Lucky images just waiting to be captured.

Joan’s job was to drop off Stu and his kayak at the beginning of the river route  and pick up both at the end of the journey. In between those weighty responsibilities, she got to photograph the park to her heart’s content.

After our second busy day at Silver Springs State Park, we went to Harry’s for dinner in nearly Ocala (also recommended by Captain Steve). This was a nice, and a less successful place to dine. Joan was pleased with her salmon salad. Stu had an OK portion of Shrimp and Scallops Orleans, tasty but small and somewhat overcooked. It was accompanied by one of the few cheese grits dishes Stu ever didn’t finish. The grits were watery, undercooked and funny colored by the apparently powdered cheese flavoring added to “enhance” the color. I suppose as a mid-Florida place, they felt they had to serve cheese grits, and as a traveler I felt I had to order them. Stu’s dessert of oreo beignets redeemed the dinner for him.

We traveled to Titusville, the nearest city to Kennedy Space Center, to see two launches.

During our stay in Titusville we were fortunate to stay at the Manatee Hammock Campground, a beautiful park operated by Brevard County. We prepared a Beer Can Chicken the first night at Manatee Hammock. The chicken was placed “head up” on a beer can and slow cooked for 90 minutes on our portable gas grill. It was the source of 3 enjoyable meals including a chicken vegetable soup dinner when we returned home. I thank Miguel every time we enjoy this meal for his help with a recipe and a pointer to purchase just the right beer can.

Manatee Hammock Park is located at water’s edge just across the Indian River from the launch location for GOES T Cape Canaveral Space Force Station in Florida, near the Kennedy Space Center. Historically, military and commercial rockets were launched from separate facilities, although today they share much of the same equipment.

The location and the trees, fishing, boating and space make Manatee Hammock very popular. We were only able to get two nights and had to leave the day of the GOES-T launch. However, the part of Manatee Hammock by the water is a public day-use park and we returned there to see the launch.

GOES-T is the newest weather satellite. It is being flown high over the equator to a location over the West Coast of the United States to replace an existing satellite that has developed electronics problems. There it will bring you the nightly TV news of upcoming weather in detail never before possible.

GOES-T has to go up about 24,000 miles and carry enough fuel to stay in a constant location for years. It must be launched on a very large rocket, the Atlas IV. In addition to the large rocket motors, the rocket has four solid rocket boosters attached. Each booster looks like an enlargement of a “bottle rocket” that some of us flew on previous July 4ths. The boosters make the long flame shown in the photo on the right.

After the launch we had dinner in Titusville at the Dixie Crossroads Restaurant, recommended by friends from home.  Joan’s serving of Rock Shrimp was delicious and she was ready to order a second dish of the shrimp. The high point of the meal for Stu was the Corn Fritters buried in powdered sugar, served as an appetizer, dessert, and take home snack. If you judge a dinner by the appetizer and dessert, this was at least 5 stars.

After Manatee Hammock, we moved Winnie to the Great Outdoors Nature, RV & Golf Resort, located just a few miles up the road. Great Outdoors is a high-end property that is “home” to nearly 1,000 RV owners. It provides a variety of sites, including the site we rented with a “carport” big enough for the largest bus-type RV. The entire site was paved with only a few decorative trees. The park is centered on a large golf course and there are thousands of golf carts on the roads.

Great Outdoor had a “nature trail” consisting of a golf cart crushed stone road thru the woods. Not much to see, but better than concrete and it never gets muddy. The resort even had 2 restaurants, and we had a very nice breakfast in their cafe, overlooking the putting green, just before we departed.

On the morning we left, there was another rocket launch, and we got up very early to drive from Great Outdoors Resort to the Space View Park, next to the Max Breuer bridge to watch the launch at 9:25 am. The launch was an Elon Musk developed Falcon 9 rocket designed for reuse as a workhorse of medium size launch vehicles. There have been an amazing number of Falcon 9 launches. This one was 147!

Most Falcon 9 launches are carried on re-used first stages. The large engine carries the payload well into the sky where it is detached before the first stage runs out of fuel. The remaining first stage fuel is used to fly the rocket back to a recovery ship where it lands, is cleaned and serviced and reused. Private industry has managed exactly what NASA tried to do with the shuttle. The current launches are significantly less expensive because much of the equipment lands and is reused.

The later series of Falcon 9 boosters are “man-rated” and are used to ferry astronauts to and from the International Space Station.

Just as amazing as the Falcon 9 story (amazing to space buffs only, I suppose) is  the payload it carried on this launch: a cluster of low earth satellites designed to bring internet to places with no other way to achieve service. Mr. Musk has donated several ground stations to the Ukraine where traditional internet is impossible in the midst of a war.

The cluster of Skylink satellites flies well below other space vehicles and is designed to descend harmlessly to earth and burn up in the high atmosphere when their useful life is done. The low earth position minimizes the time delay and makes practical internet voice communication in remote areas at a moderate cost. This communication is commercially available today in far rural areas at a price much lower than competing technologies.

Scientists who look far into space for approaching dangerous asteroids that may hit earth are concerned the swarm of thousands of Skylink satellites may impede their view.

After an enjoyable visit our travels came to an end with a relaxing and enjoyable breakfast after the early morning Falcon launch. We went to the Cafe at the Blue Heron Restaurant at the Great Outdoors RV Park where we were staying. Stu enjoyed a lovely Western Omelet and Joan ate every bit of her two egg breakfast – a tasty end to a nice trip.

We enjoyed a rest, repair, and appointment visit at home. Then it was time for our next adventure, our Spring trip to Austin. Follow that adventure by clicking here.